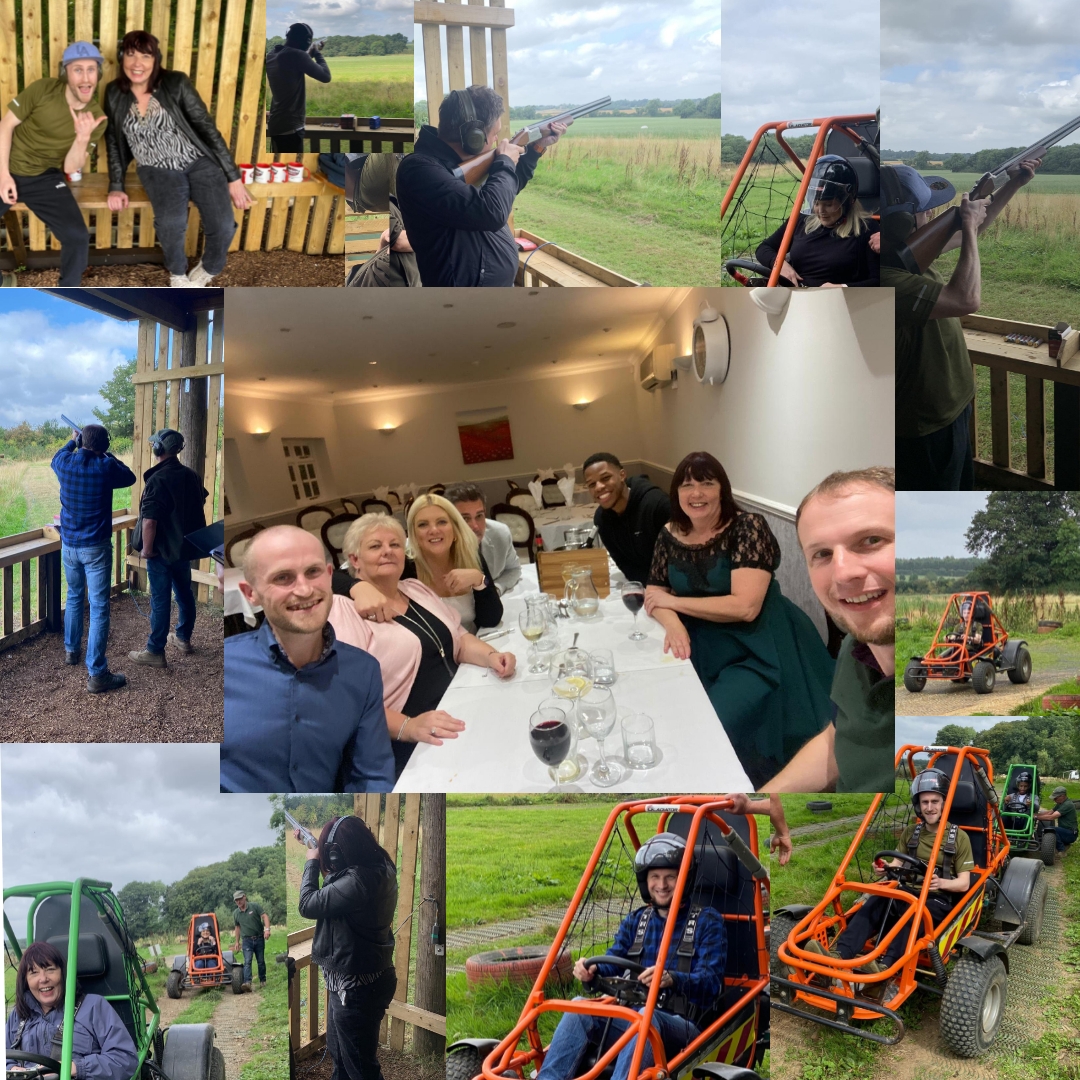 Happy Birthday to 365Tribe, What a great way to spend our third year anniversary.

The 365tribe team had an amazing time catching up with everyone socially, outside of working virtually! A huge thanks to everyone who attended and helped in organising such a great day. We started the day buggy racing in which Garrydene said was ‘exhilarating’ (which it truly was). After taking a few laps to get used to the corners and bumps we were all ready to be scouted by Formula One. However, some (one) of us were sorer losers than others – “The timing of the laps was clearly wrong”. Massive congratulations to Rob who took the win.

The clay Pigeon shooting was great fun as well whilst overlooking the magnificent countryside views. It was the first-time clay Pigeon shooting for a few of us, but you would not have thought so – we were pros! (you may catch us in the next Olympics). The hardest part of the activity was called Rabbit. This is where we had to shoot the clay as it was bouncing off the ground. Luckily, Matt saved the day and made sure we had something to eat otherwise we would’ve gone home starving with the rest of our shooting. Massive congratulations to Matthew who took the win in that activity.

Lastly, we rounded the day off with a nice team meal which was superbly cooked by the chef. The meal was wonderfully accompanied by great talking topics (we even agreed we’d all be going Las Vegas)

A few of the teams highlights were:

“I did not have to worry about anything. Everything had been carefully planned and executed. It just flowed from one thing to the next without any awkwardness. Meeting Rob in person and having time with everyone. A real celebration. The place we stayed in overnight was perfect too. Loved it”.

“Shooting was the event that everyone cared about. I can’t remember who won, but it’s the most difficult & technical event, so they must have been very special. Amazing weather for it and the view over the fields was a nice touch! And seeing Rob have to abort when a Red Kite flew over!”.

“This was a great day out, it’s really important to us at 365Tribe to celebrate our growth and successes, by downing tools and coming together as a team”.

This website uses cookies to improve your experience while you navigate through the website. Out of these, the cookies that are categorized as necessary are stored on your browser as they are essential for the working of basic functionalities of the website. We also use third-party cookies that help us analyze and understand how you use this website. These cookies will be stored in your browser only with your consent. You also have the option to opt-out of these cookies. But opting out of some of these cookies may affect your browsing experience.
Necessary Always Enabled

Any cookies that may not be particularly necessary for the website to function and is used specifically to collect user personal data via analytics, ads, other embedded contents are termed as non-necessary cookies. It is mandatory to procure user consent prior to running these cookies on your website.

You can find out more about which cookies we are using or switch them off in settings.

This website uses cookies so that we can provide you with the best user experience possible. Cookie information is stored in your browser and performs functions such as recognising you when you return to our website and helping our team to understand which sections of the website you find most interesting and useful.

Strictly Necessary Cookie should be enabled at all times so that we can save your preferences for cookie settings.

If you disable this cookie, we will not be able to save your preferences. This means that every time you visit this website you will need to enable or disable cookies again.